Today I submitted 3 images to the Monotype Guild of New England for their annual national show in early 2013.  It’s a bit out of my league at the moment, and I have reservations about submitting to anything when I feel like I need this year to build a body of work.  It’s not cooked yet, the flavors haven’t melded.  But it was hard to ignore that monotypes and monoprints have been my primary output lately so, what the heck.  I won’t hear until 12/10.

After serving as a juror on a week long murder trial, which was quite a wringer let me tell you, I managed to get back to the studio (a.k.a. my kitchen turned print shop) last thursday with the kids and, not expecting anything, I got some images I liked. 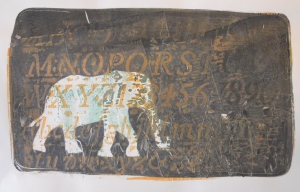 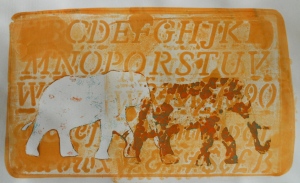 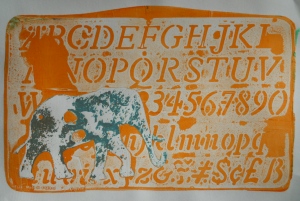 This is a riot.  All I did was trace a picture of an elephant from a Jane Goodall book for kids, on acetate, ink it up and print away.  You can see that I’m obsessed with the alphabet stencil.  I love the way the letters and symbols are the building blocks for a language, in a similar way that yoga poses are the building blocks of a yoga practice, and simple images can be the building blocks of a visual language.  I’m still having problems getting the ink to adhere and release properly from the acetate stencils so I’m going to have to come up with something better.  I can try a sturdy paper and coat both sides with gloss or matte medium.  That’s next.

Did I mention that I think I need to buy a printing press?  This is Pamela Lawson’s fault.  I saw her monotypes at Lawrence Academy’s gallery in Groton, MA last thursday and they are gorgeous and bright and cheeky.  Take a look out her red-winged blackbirds, done mostly with rollers.