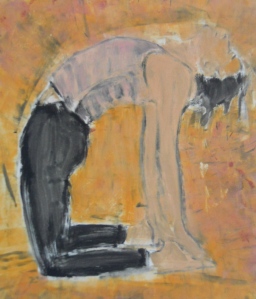 This is Ursula, in Ustrasana, the camel pose.

I’m taking some sessions with printmaker Pam Lawson.  It is a joy to have access to a press and the wisdom of an experienced printmaker to go along with it.  That night I told my husband the bad news, I’m going to need a press.  He says fine, stop fooling around and let’s fix up our house and sell it, and then I can have a press and maybe a space of my own to work.  The problem with that is that I’m up against time constraints.  When I start fixing up the interior of our house, that’s going to eat up my studio time, at least for a while.

There is so much potential here, I want to work with multiple plates, layering the figures in their yoga poses against Islamic tile patterns.  Meanwhile, Ellen Olson-Brown reminded me to get back to daily drawing, and I’ve been doing more or less that for a few weeks now.  Here are a few sketches. 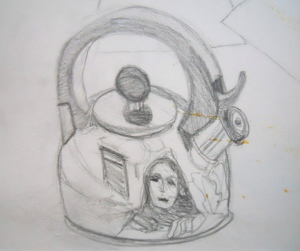 After a few sketches the teapot wanted more attention, so I’ve been working on this one for several days:

The handle is a bugger, let me tell you.  What’s nagging me about the prints above top is the hands, I’m not drawing them terribly well and they need to be good, so once the teapot is done I’ll practice drawing the yoga poses for a bit, and try to get those hand positions down.  The two teapots here are a good illustration of a frustrating drawing phenomenon.  Quick sketches often have a life to them, a vibrancy that is hard to maintain in a longer more detailed drawing.  You can kill the darn thing so easily, and it becomes lifeless and dull.