Because those are just staples, n’est-ce pas? 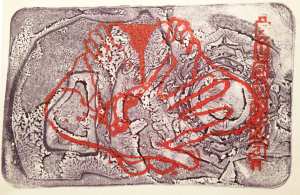 I’m participating in a 30 day challenge that my friend Ellen Olson Brown has been kind and ambitious enough to host.  So this print is day one- a print a day.  My gelatin plate is old and grungy- I’ve been using it all Summer and it even has bits of fern stuck in it from trying to add plant matter to a card for a friend the other day.  The purple ink behaved in a surprising manner with the stencils, as if the water in the plate resisted the ink a bit.  This did not happen with the scarlet red, which I attempted to damp down with some yellow ochre.

I’ll be making a new plate shortly but as I’m helping install a multi-media exhibit tomorrow (Mutherer by Denise Dumas), I won’t get to it until Friday.  If I can squeeze it in on Thursday I could at least print on Friday with the new and larger and hopefully cleaner plate, we’ll see.